The Legacy of the Buffalo Soldiers 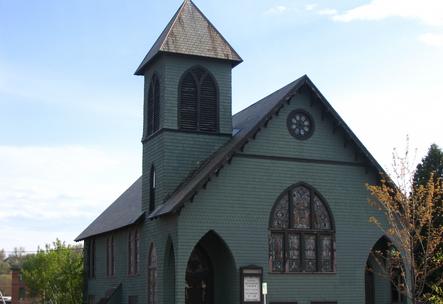 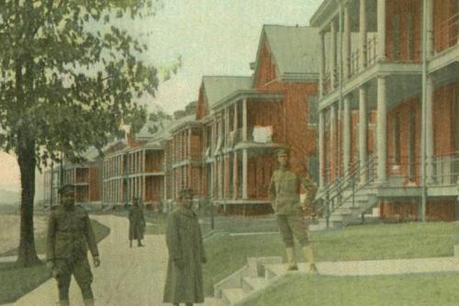 In 1918, the current United Methodist Church of Winooski literally rose out of the ashes of the old church, which had been built in 1860, on land donated by the Burlington Woolen Company.  Fire destroyed the original building one Sunday afternoon in December 16, 1917, after Sunday service.  In 2001, the new church was placed on the US National Register of Historic Places as a fine example of the Carpenter Gothic Style.  The most famous depiction of this style is the farmhouse behind the couple in Grant Wood's painting American Gothic.

In mid-summer 1909, the Tenth United States Cavalry Regiment arrived in Vermont, for a four-year tour-of-duty.  The "Fighting Tenth," as they were known, had charged up San Juan Hill with Theodore Roosevelt's Rough Riders and fought bravely in the Philippines.  In July, they arrived in New York City, where they were celebrated as heroes in a ticker-tape parade ending in City Hall Park.  The next morning this remarkable force would set off to Vermont. . .

Among the many donors to this church were members of the renowned Tenth Cavalry,  who were stationed at Fort Ethan Allen from 1909-1913. Known as the "Buffalo Soldiers," a number of these heroic soldiers settled in Winooski.  Two of their descendants still worship here.

The history of Methodism in Winooski probably dates back to the 1830's. Like many communities in America at the time, itinerant preachers or nearby clergy served the protestant needs of the town until 1846, when the Second Methodist Church of Winooski was organized.

By 1859, the congregation had raised enough funds to build its own meeting house.  Charles S. and William G. Harding, who were then owners of the Burlington Mills, sold the corner land on Follett and West Allen Streets for one dollar and the rights to three pews when the church building was finished.  The original church was built in the Greek Revival Style that was popular for public buildings at the time.

After the fire in 1917, the church continued to hold English classes for French emigres and provided other social services in the basement, once that remaining part of the church had been roofed over, but services were transferred temporarily to the Congregational Church across the Street--a wonderful act of brotherly love and ecumenism.

The new church that we still occupy continued its social mission by helping the soldiers who were stationed at Camp Ethan Allen (see accompanying article). We still honor that tradition of faith through service. Our basement provides temporary homes for other congregations, space for an AA self-help group, as well as for the Winooski Food Shelf.  English as a Second Language is still taught here as part of the Refugee Resettlement Program.